Skip to content
Home/Development Stories, Distribution & Exhibition, Festivals & Industry Events, Production Stories, The Long Read/Budgets and breastfeeding – our babies don’t mean we can’t get out there and do it!
Previous Next

Budgets and breastfeeding – our babies don’t mean we can’t get out there and do it!

Producer Victoria Bavister shares the story of the making of her debut and BIFA-nominated feature – COUNTY LINES – from the grind of financing, through to production and eventual release. Read on to find out how Victoria balanced filmmaking with parenting… We hope this inspires and builds confidence that it is possible to do both! Huge thanks to Victoria for sharing her experiences.

I recently released my debut feature film COUNTY LINES – it’s been one hell of a journey, an absolute labour of love and one that I sometimes look back and think, “How the on earth did we do that?” The film was released across UK and Ireland in December by BFI Distribution (after two postponements – thanks COVID!) and the reception has been a little mind-blowing but (not going to lie) incredibly gratifying to know all the blood, sweat and tears were worth it.

You don’t have to make a decision between parenthood and a life in film.

As we’re still in the early days of 2021 I wanted to take the time to reflect and share our journey – in the hope it may give you the confidence that you don’t have to make a decision between parenthood and a life in film. It’s certainly not easy – it takes a huge amount of hard work, dedication and sacrifice but if you want it enough anything is possible.

I am a creative producer and wife of writer/director Henry Blake. We have made several short films together and with neither of us attending film school have taught ourselves everything we know. When we first decided to make the move from shorts to features we developed and shopped a script around only to keep hearing “It’s good but it’s not great.” and “You should write what you know.”

At first this baffled us so we continued to wrestle with our material until in 2015 we had a light bulb moment – Henry was working in a Pupil Referral Unit and dealing with children being exploited and trafficked across the country to sell drugs. This was known as ‘county lines’, a national crisis which was unfolding before his eyes. As a filmmaker Henry felt passionate about bringing this issue, and his youth work experience, to the general public’s awareness not as ‘entertainment’ but as an authentic, powerful and compassionate piece of cinema.

I believed Henry’s vision for COUNTY LINES had the potential to be a poetic and deeply affecting drama that could engage a traditional theatrical audience as well as act as an opportunity to engage communities across the UK, raising awareness and sparking national debate. And so we set out to make a short film/proof of concept to do just that.

We wanted to move quickly so decided not to go down the soft money route and risk entering months of development. Instead, we approached a number of charities and organisations that we believed had a vested interest in the topic, however no one came through. My father pledged a small amount that we promised to pay back when we raised the feature film finance and then in a moment of madness took out a whopping loan to pay for the rest. 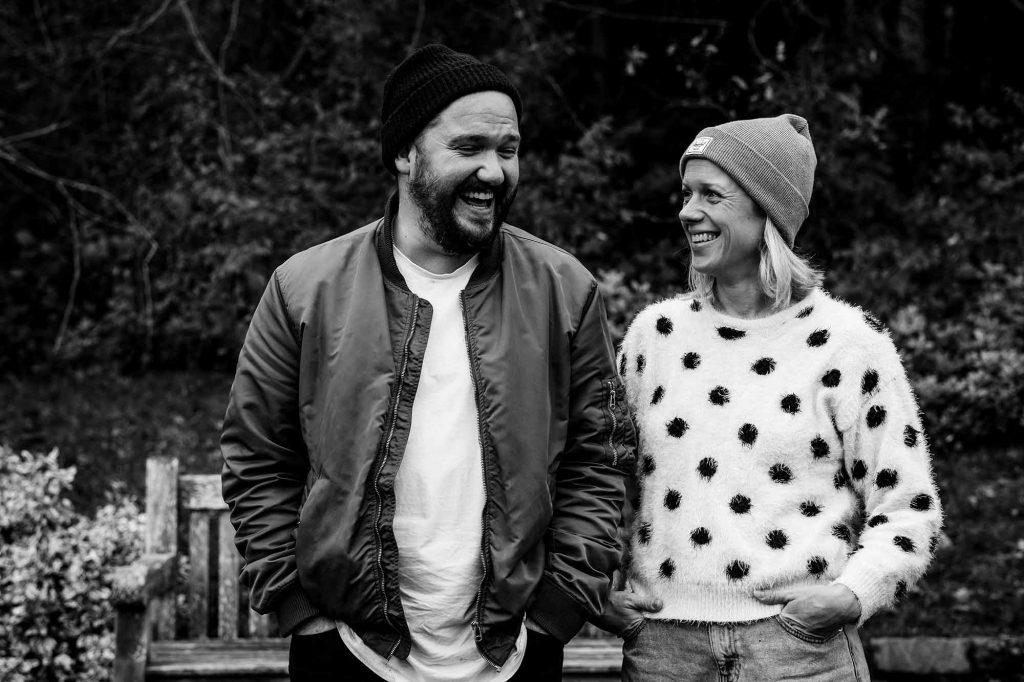 Our first son Rory was 15 months old at the time of filming, he was on set throughout and who knows how we found the time but we conceived our daughter Billie during the shoot too!

2017 became a year of developing two babies, the script was delivered in June and Billie was born in August.

During post-production of the short film, when finances ran dry, I bought on my producing partner David Broder to help us complete. He quickly recognised the potential of our vision for the feature film and understood our desire to move quickly so in early 2017 he took a leap of faith and commissioned Henry to write the script.

So 2017 became a year of developing two babies, the script was delivered in June and Billie was born in August (ten days after moving house!). David and I hosted a short film screening at BAFTA, inviting key industry professionals with the aim to gain traction and build momentum for the feature. The screening piqued industry interest so we approached all the standard film institutions for funding, however we had no success. When Billie was just five weeks old we attended the Production Finance Market (I kept nipping out between meetings to breastfeed) and had a number of follow up meetings. Whilst everyone could see the potential, with such tough material and no track record for Henry as a filmmaker, no one was willing to take the risk. Determined not to give up I passionately fought for the film and David pledged he would be a key investor if I were able to secure the remaining funds. 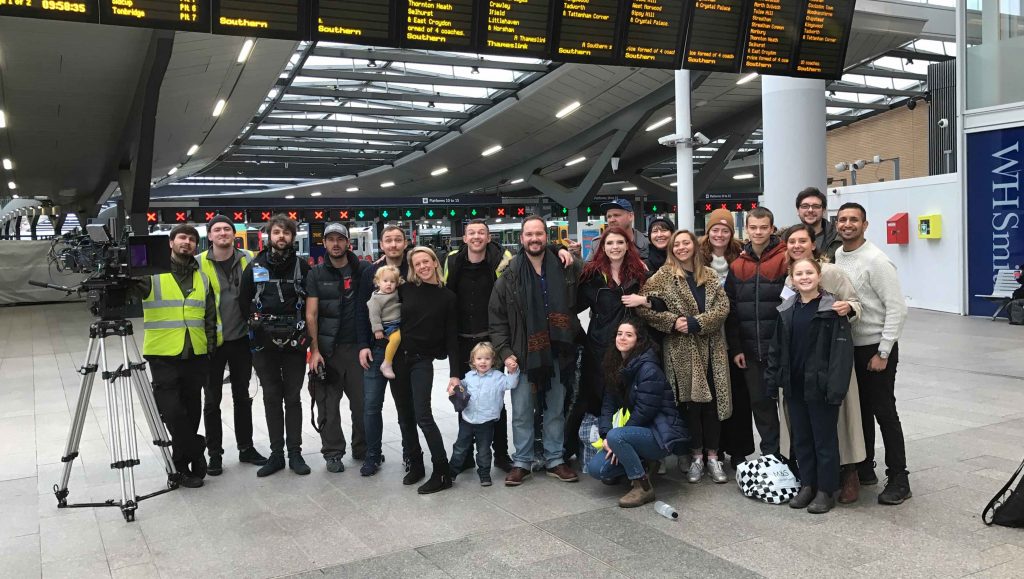 (Billie) would come to meetings, sometimes I’d manage to time it with a nap or a friend would meet us and take her for a walk or she was playing with toys in the corner.

So I spent the first year of Billie’s life out raising finance. She would come to meetings, sometimes I’d manage to time it with a nap or a friend would meet us and take her for a walk or she was playing with toys in the corner and I have to say, on the whole, everyone was hugely understanding – in fact I think it added a little bit of charm. As I was on maternity leave and with Henry being a freelancer (so no consistent income) we couldn’t afford regular childcare, so we called upon friends A LOT to help out with Rory and I am forever indebted to their support.

In June 2018 I was fortunate enough to meet Christopher Granier-Deferre who came on board the project as an Executive Producer. Things moved quickly from this point and we entered pre-production in October 2018. At this stage Rory was three so qualified for his 30 hours free childcare and attended a child minder three days a week but Billie was still with us full time. On David’s suggestion we included a line in the budget for childcare and he found a family friend on her gap year willing to help – the idea being she could also get on-set experience when not needed for the kids. The financiers approved the budget line for childcare without any question, they are all parents themselves and were very supportive and understanding.

On-set childcare meant, despite the long hours, I could still see the kids. I could travel with them, eat lunch together and play.

Having on-set childcare meant, despite the long hours, I could still see the kids. I could travel with them, eat lunch together and play (in moments of calm). We were also able to offer cast and crew childcare if needed. Admittedly no one took us up on this – but it is definitely something I will continue to offer on productions to come. I am eternally grateful to everyone who worked on the film and how they embraced the chaos of having young children around.

Ten months later and with our third baby in arms we had our world premiere at the BFI London Film Festival. Sadly this coincided with the death of my father, who was involved in a car accident two weeks earlier and suffered a fatal brain injury. He never got to see the film and everything we had been working so hard to achieve. But I think he was looking down over us as not long after we were contacted by the BFI Distribution team who wanted to acquire the film for a UK and Ireland wide release.

I sometimes felt I missed out on attending festivals – with a husband who is the writer/director and was in hot demand it fell on me to stay home with our three young children.

Over the next few months I sometimes felt I missed out on attending festivals – with a husband who is the writer/director and was in hot demand it fell on me to stay home with our three young children. I don’t put this down to anything but Mother Nature and the practicalities of a breastfeeding a tiny baby. One of us had to stay home and it simply couldn’t be him. That said all five of us attended the Glasgow Film Festival – an absolute 48-hour whirlwind and one we’ll never forget.

COUNTY LINES was due to be released in April 2020 but due to Lockdown 1 had to be postponed, we then rescheduled for November (on my father’s birthday of all days) but sadly Lockdown 2 came into effect so we had to delay again. We eventually released on 4 December in select cinemas and online. It was a much smaller theatrical release than originally scheduled but after a difficult 18 months it felt good to finally be out and the positive critical reception has been a much needed boost to a topsy-turvy year.

As a producer I was lucky enough to incorporate a line in the budget that covered childcare, something I believe needs to become the norm within industry practice.

I hope in sharing my journey I am able to give you the confidence that as creative professionals we don’t have to choose between parenthood and pursuing a life in film. Whilst there are times I have felt on the outside, out of touch with my peers or that someone is judging me and my wild travelling circus of a family, on the whole everyone has been wonderfully accepting and encouraging. As a producer I was lucky enough to incorporate a line in the budget that covered childcare, something I believe needs to become the norm within industry practice. We didn’t have anything fancy – the kids were in the production office, having stories in the green room, napping amongst the costumes – and whilst I hope as our budgets go up the provisions can improve, one thing I know is they had fun and nothing ground to a halt. So being a parent doesn’t have to be an obstacle. I hope I have shown you can do both.

County Lines is released digitally on BFI Player now and will be out on BFI Blu-ray/DVD on Monday 19 April 2021.

Victoria Bavister is a creative producer and co-founder of Two Birds Entertainment with writer/director Henry Blake. Their critically acclaimed debut feature film COUNTY LINES premiered at the London Film Festival 2019 and was released in UK and Ireland by BFI Distribution. It is nominated for four BIFA awards and two Critics Circle Film Awards.

Victoria spent five years as development producer for Simon Curtis’ 39 Steps Entertainment – overseeing his first look deal with Big Talk Productions, working on commissions for Working Title, On The Corner, BBC and Sky and supporting the development of his slate of feature films.

You can find and follow Victoria and COUNTY LINES on social media: