Skip to content
Home/Interview, Working in TV/Lorna Martin on Making It Possible and her new TV series
Previous Next

Lorna Martin on Making It Possible and her new TV series

We caught up with Lorna Martin, one of our Making It Possible alumni, ahead of the broadcast of her new TV series. Lorna is the writer and co-creator, with Sharon Horgan, of the comedy drama Women on the Verge. She is also an award-winning journalist, formerly Scotland Editor of The Observer and columnist for Grazia and she’s the author of the comic memoir Woman on the Verge of a Nervous Breakdown from which the upcoming TV series was adapted.

What stage were you at in your career and what prompted you to take part in Making In Possible?
I took part in Making It Possible at the Edinburgh Film Festival in 2016 and back then I was at a bit of a career low. I’d left journalism and had been trying to ‘make it’ as a screenwriter for quite a few years. I’d reached the short-list in a couple of competitions, however, though I was writing lots of scripts I wasn’t getting anything made. On top of that, I wasn’t making a living and this was something I was really struggling with. On a practical level, the costs of childcare, even just on a part-time basis, were crippling. On a psychological level I was finding the transition from independent professional woman to financially dependent mother very tough. So, I was just about to quit – again – and try to get a proper job. I decided I had nothing to lose by going to the event.

Any highlights from Making It Possible?
I’d say one of the main highlights was just meeting other parents who were sharing the same struggles in trying to combine an insecure creative career with motherhood. Both want/need 100% from you, and so you often feel you’re failing at both. I found it helpful just realising that other women were having the same doubts and fears about what they were trying to do. I wasn’t on my own! Also, I’m very grateful to my mentor on the programme, Olivia Hetreed. Although we only spoke a few times, she gave me some really encouraging words and at a time when I really needed them.

Not long after Making It Possible I won a John Brabourne Award (a scheme administered by the now Film & Television Charity to help emerging talent in the film and TV industries) and it bought me that most precious of commodities – some worry-free time to develop new projects as well as a very welcomed confidence boost.

Tell us how Women on the Verge came about and how was the process of creating it?
Sharon initially contacted me back in 2011 about adapting the book but for various reasons it took a long time to find the perfect home for it. However we got there in the end and the series was made under Sharon’s production banner, Merman, alongside House Productions, which was set up by former Film 4 boss Tessa Ross and former Working Title TV boss Juliette Howell.

Sharon and I co-wrote the first episode and co-created the series together. I wrote the other five episodes myself but with a lot of notes and guidance from the producer and execs. It’s been exciting, stressful and really hard work but also an incredible opportunity for me to work with such talented, funny and inspiring women as Sharon, her business partner Clelia Mountford, and Juliette, who’s also Exec Producer.

The show we’ve made is a love letter to women who haven’t ticked all the boxes and whose lives are a bit messier and more complicated than they ever thought they’d be.

This was my first TV commission and I could not have been in better hands, working with Sharon was like a masterclass in script writing. She elevates every scene to another level and I loved the whole collaborative nature of creating this TV series.

What’s on the horizon for you?
I took some time off afterwards because the whole process was quite intense, but I’m now developing some other projects.

When can people watch Women on the Verge?
It starts on Thursday 11 October at 10pm!

Kerry Condon (Better Call Saul), Nina Sosnaya (Marcella) and Eileen Walsh (Catastrophe) will star alongside Sharon Horgan as trio of 30-something friends. Horgan plays psychotherapist Dr. F., Condon is Laura, an investigative journalist who has been sleeping with her boss. Sosnaya is Katie, divorced and single and Walsh plays Alison, who has recently gotten back with her ex and is trying for a baby.

Find out how to watch Women on the Verge

The programme will also be available on RTÉ in Ireland. 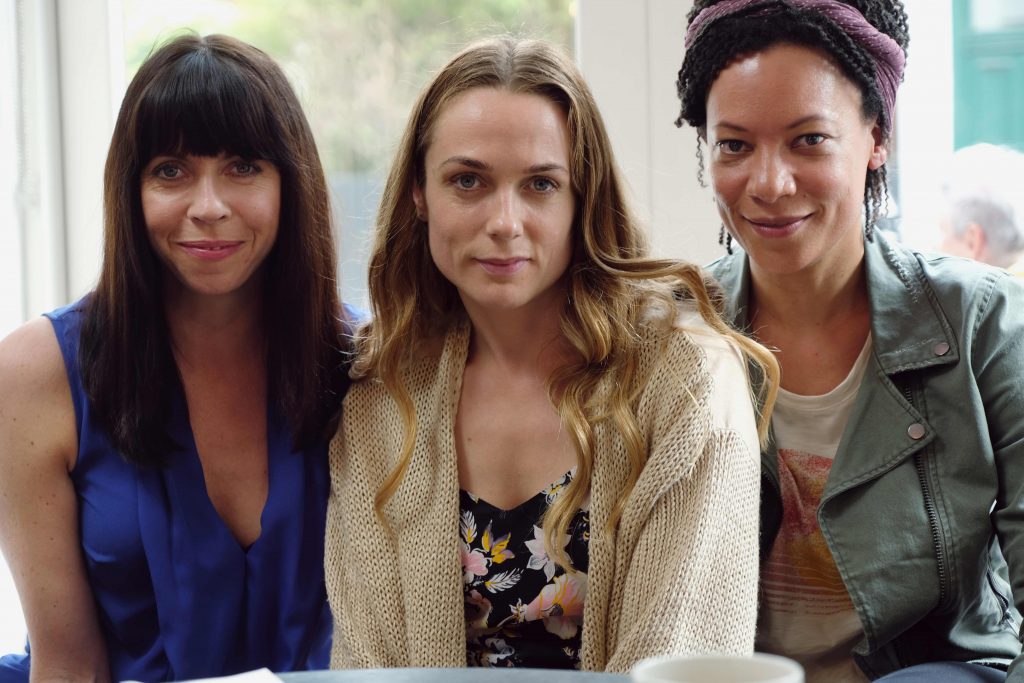 All imagery courtesy of UKTV