Our writers in residence – part two

Here’s the second in our mini-series from the writers who took part in our free week-long residencies. Our aim was to help writers who needed some focused time away from their caring responsibilities to advance or complete a writing project, or research / develop ideas for a specific industry opportunity.

The residency spaces were made possible by the generosity of three members of our community with holiday cottages they donated for free, and therefore the only cost to participants was their travel and subsistence.

In this instalment we hear from Grace, who paired up with Alex for a week of focused work in Dent…

When I applied for the retreat I knew that my husband would be away (he’s a roadie). But a good friend encouraged me to apply, so I did so knowing that it would be a bit of a logistical nightmare to find childcare for my toddler Hazel. Being accepted onto the retreat was met with sheer excitement and then lots of fretting at how I was going to make it all work. My mum stepped in to offer childcare and wouldn’t have a word against it, she is my absolute hero!

I began my Raising Films writing retreat with nervous hopefulness of what I might be able to achieve. However I would be lying if I didn’t say I was a little nervous of the pressure to be productive. But given a week with no toddler, no work deadlines and no distractions, I knew anything was possible! After having Hazel, I now have a completely different sense of time. Give me thirty minutes and I can do the work it would have taken pre-baby Grace a good three hours to complete. So give me a week and… well it turns out I can do quite a lot!

I entered the week in the early stages of developing a TV series. After taking time to get to know my characters, by the middle of the week I managed to really get down to the root of my story, more so of my lead protagonist’s story. Once I knew her story, I was able to write a fresh step outline not for a TV series, but for feature film instead! It had originally been my intention to write the project as a feature film but I’d been carried away by all the various sub plot options, which had led me towards creating a TV series. It is only by taking time out to concentrate on my project that I was able to see what elements of the story were most important, it felt really good to hone in on the real story.

Before the retreat, I was also a little apprehensive about who I would be sharing the retreat with. Little did I know the ‘Womance’ I was about to embark on with Alex in Dent! We got on so well I couldn’t imagine having a better experience with anyone else. We’ve already started talking about a future project we’d like to work on together and have plans to meet up and write together at the end of the month.

I returned home from the Raising Films retreat energised and full of ideas. I am completely over the moon to finally be at a point with my project where I can really get cracking with it all, and also to have made a new friend that is both talented and inspiring!

I would like to say a huge thank you to Raising Films and to the owner of the cottage, it was a lovely place to stay and we felt very at home there.

Writing is a deep sea, with all the best story moments embedded within the vast sandy ocean floor waiting to be discovered. You just need to bear the pressure of submersion and have enough oxygen to last the journey, that’s what I love about writing. You never know what you’ll discover among the coral, or while out-swimming sharks. It also makes best use of my autistic hyper-focus, I can sink for days. Yet hyper-focus writing conflicts with caring.

Caring is unpredictable. Writing while caring is being a fish on a hook. Any moment you could be reeled out of the depths and slung ashore – disorientated and suffering the bends. The Raising Films residency was like a group of kind mermaids throwing me back into the sea, with a packed lunch of oxygen and protected by a magic bubble of time.

I splashed landed in Dent, Cumbria. A place so different from my housing estate in Manchester that I suffered a different type of bends. Green and blue fizzed up my mind and stretched for miles rendering my sense of self inaccurate and pointless. There was no better place for a writer to end up. The land was magic. The cottage was magic too. It owned a small standing stone in the garden (which I called Sally) and a woodpecker doorknocker which, (if it had not been for Grace, the other writer on residence) I would have gazed/knocked for hours (one downside of autism.)

Rooks summoned me for work in the morning and the baying of sheep, drifting down the ominous figure of Giant Mother-Earth Hill, signalled wind down in the evening. Everything synched with natural rhythms, evoking a special kind of inspired action in the writing itself. The project I worked on became lyrical and easier to structure. I had arrived with the problem of pacing and weaving three dimensions into three distinct timelines and under the watch of rooks, sheep, and Sally the Stone I observed the structure plait and decorated itself easily. As if by magic.

More magic arrived in Grace (the fellow resident writer/producer/director/wild garlic forager) I had been really nervous about meeting her, as being autistic doesn’t always lend itself to smooth relating. But she felt like a long lost friend, as if we were picking up where we left off last time wherever and whenever that was… We talked films late into the evenings and shared a preference for optimism. I found her approach to her craft, life, and family inspiring. One evening, sat by Sally the Stone, gazing at constellations we couldn’t name, we planned our future collaboration. (We also think we heard a werewolf, but we can’t be sure.)

The whole experience gave me more than I expected: a collaborator, a finished draft, and a new appreciation of how place and space influences creativity. I cannot thank the owner/s and Raising Films enough for the experience. Out of this kindness, new stories will grow and fresh collaborations too. I hope the scheme runs again for other writers and if it does, please say hello to Sally for me. 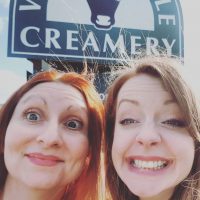 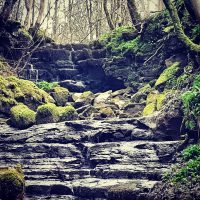 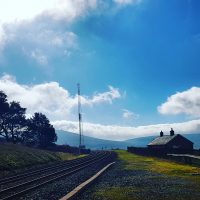 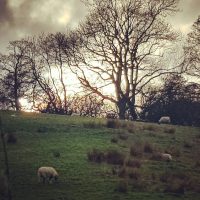 Get updates on future residency opportunities by signing up
for the Raising Films newsletter via the button below.