“I’m excited, and a little unnerved, to be part of this original event, which brings my professional and parental responsibilities into the same space for the first time,” said Making Films, Making Change panellist Jennifer Armitage, Screen Officer at Creative Scotland.

It was the first time for a lot of things: our first Raising Films event with childcare, courtesy of fantastic artists Barry Neeson and Erin Friel. Our first screening in Scotland, repeating our Directed by Women screening of Raising Film-er’s Helene Klodawsky‘s incredible Come Worry With Us! for a new audience. Our first experience of the Radical Film Network, as part of their 2016 Glasgow Festival and Unconference.

Excited to be part of a weekend’s worth of radical thinking about cinema, art and society, and a little unnerved by the big questions we were asking, we opened the doors at 10am on Monday 2 May 2016, to find a warm and welcoming audience who immediately dived for the soft play and mask-making (under-tens) and for GMAC Film‘s superb screening room and coffee (adults). 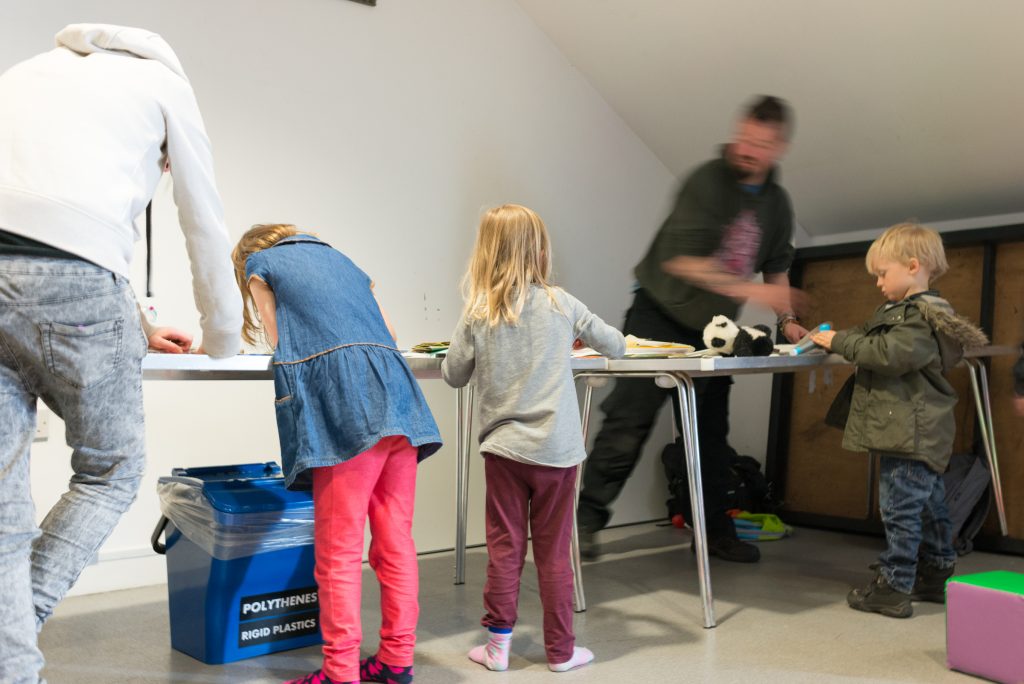 After the screening and a picnic lunch (enhanced by ball pits and many cushions), Jen joined filmmaker and artist Tracey Fearnehough, actor/theatremaker/agitator Tam Dean Burn and Raising Films’ Sophie Mayer as chair, for an enlightening, inspiring and impassioned discussion about how to make art, make change and make our families and caring responsibilities a central part of that. As our partners EWA and Directors UK announce studies showing persistent gender inequality in the UK film industry (ahead of our survey on parenting in the UK film and TV industry), we know that change has to happen: but how?

Jen (with her toddler interjecting commentary and making performance art as we spoke) observed how rare it was to have an opportunity to bring together the personal and professional: either to let her family life shape or inform her work life; or to bring home the questions of access, outreach and inclusion that she engages with in her job.

As Tracey pointed out, even when working on an artistic project, even a collective and interactive one, sometimes you have to “put the camera away” and engage with the personal, realising that “change-making” might come from a conversation and a practical act, rather than through a pre-conceived aesthetic plan. She also noted that she had taken her teenage children on her shoot, and would keep doing so.

Tam talked about making art with his children and his partner, about how that has changed as his children have grown older (his daughter now, he suggested, being old enough at six to run the merch table on his and Emma’s Julia Donaldson reading tours). He also argued that change at all levels and scales is crucial: while believing in, and acting towards, a full social and economic revolution to change all the systems that we work within, he also celebrated the importance of all measures of change, from making individual work to Creative Scotland’s new access guidelines.

These are particularly critical. Tracey said, being in a room together remains the most effective and pleasurable way to work out what needs to change and how, however efficient the internet may be for time-poor parents. Emma Schad mentioned The Children’s Wood, Tam saluted Solás festival, and Jen pointed out that Frozen singalong performances sell out in minutes. Families want to spend time together, with other families, inexpensively.

Audience member Matt Lloyd, Director of the Glasgow Short Film Festival, talked about the motivation for adding an animation workshop to its family programme of animated shorts, and wanting to build further on its success. Like Sheffield DocFest’s crèche provision, this is an example of festivals thinking smartly about what audience outreach really means and needs.

Tracey argued that this kind of change needs to be at the heart of projects and plans, not an add-on exercise in ticking boxes. Jen agreed, noting that funding bodies are made up of human bodies that are committed to their aims, and to listening to artists and communities.  It’s difficult to quantify change: that much we all agreed. But that shouldn’t stop us making work that changes us personally by making it, and changes the communities around us.

Hope Dickson Leach, filmmaker and Raising Films’ co-founder, observed that in Come Worry With Us!, Jessica Moss brings together being a musician and mother by making music with her sister Nadia, after seeing Nadia teaching a kids’ rock music workshop at a small festival. It seems like such a small, quiet transformation compared to the student and neighbourhood protests in Montréal, also seen in the film – but it is given the same attention. When making art, the personal is the professional, and as such personal changes are to be nurtured as much as external ones.

One screening and panel won’t change the world, and we knew that long before we packed away the cushions and socket protectors at 3pm. “What’s happening this weekend should be happening all the time,” Tam noted, and – after an exhilarating day as part of the Radical Film Network – we couldn’t agree more. Of course, it wasn’t just one screening and panel: we felt part of a citywide (and more) conversation that included the Liverpool Small Cinema as well as the Scottish Queer International Film Festival and Glasgow Women’s Library.

It takes a community to make a film, raise a child – or make change. That’s why the Radical Film Network is so crucial – both to kickstart the change through festival events, and to keep it going year-round through networked community. Maybe some of the people of all ages who came in and out of the screening with masks and biscuits and stories will go on to make the art that makes big change, through the network; maybe the masks and playgrounds and friendships and thoughts they made on the day will be the incremental, individual, shared and sustainable small changes that make the big change.

Or maybe going to a screening and panel where there’s a crèche shouldn’t be a change at all – but, as our volunteer Kylie Grant said, “It really was [radical] to have an event where parents and children were equally as welcome and equally as encouraged to learn and question the world and be part of the discussion.” Raising Films: changing the world, one nappy at a time.